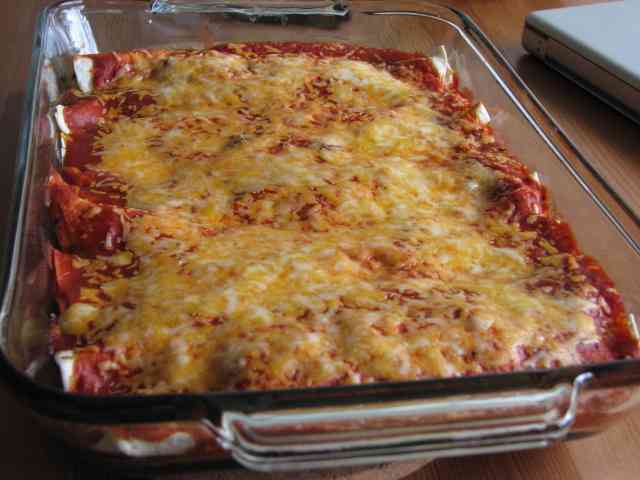 In an atmosphere which could only be described as reminiscent of the great 'cook off' television show Iron Chef, two great Olympians squared off today in the first ever food battle held at Olympic High School.

Since the beginning of the school year, Principal Kate McClatchy and social studies teacher Jessie Forsland have been exchanging jabs over whose homemade enchiladas would stand up better in a taste test.  After exhaustive negotiations, both sides agreed to a cook-off format which could only be described as tension filled.

Jesse's enchiladas were the first to be displayed and came out steaming hot.  Most in attendance felt that his 'meat filled' treats had a decided advantage over Kate's vegetarian style.  While Kate frantically tried to get the temperature in the oven to a respectable 350 degrees, Jesse's delicacies were being devoured by the Olympic staff who not only came to eat, but also to judge.

After several nerve wracking minutes, Kate made her way from the kitchen and placed her enchiladas on the table.  By this time, most of the staff had sampled Jesse's and were ready to make the comparison.  It took only a few minutes to devour Kate's tasty treats and it was time for staff to mark their ballots.

After what seemed like an eternity, the votes were tabulated based on the following criteria;

Out of a possible maximum total of 300 points, the results were as follows;

As I circulated throughout the assembled staff, I got the distinct impression that this event would not be the last 'cook-off', but only the first.  Negotiations are already underway for another contest.  Keep checking this website for further details.